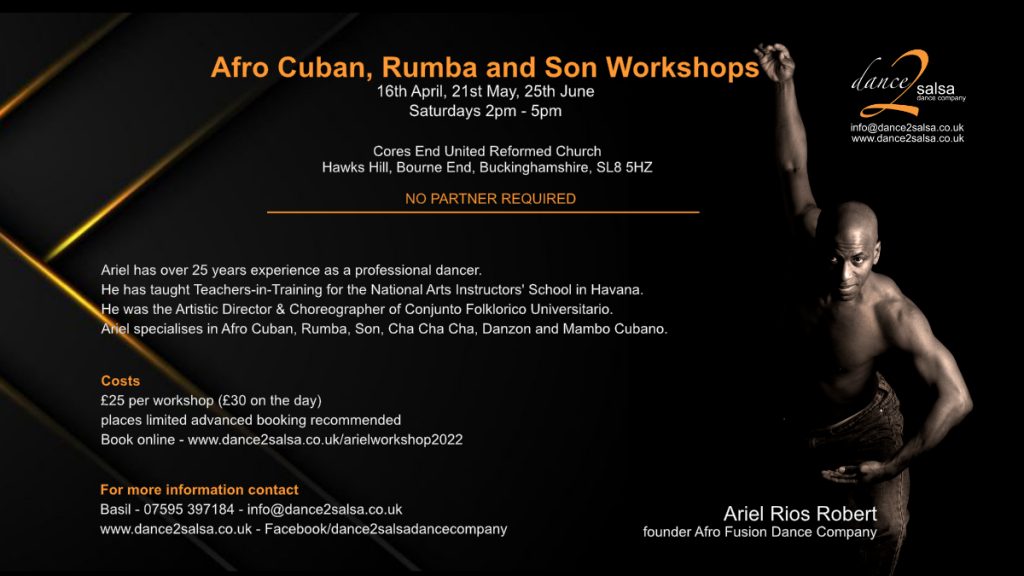 We are totally excited to be able to bring you a fantastic talent and an amazing Afro Cuban teacher Ariel Rios Robert who will be teaching three 3 hour workshos on the following dates:

The workshops included 15 mins Body movement techniques working together with rhythm and music interpretation that will improve your style and fluidity in these and many other contemporary and Popular Cuban Dances. You will learn Basic steps and progress to more advanced steps to improve your dance technique and incorporate it in your preferred dance style. You will also learn to portray the character and attitudes of the different Orishas where you will learn the basic body movement which will focus on the upper body and footwork. Throughout the workshops you will learn a generic routine to help you combine all the above dance elements together and each workshop will review and reflect on the previous workshop before adding new elements – in other words the workshops will be progressive in nature.

Ariel has over 25 years experience as a professional dancer and has taught Teachers-in-Training for the National Arts Instructors’ School in Havana. He was the Artistic Director & Choreographer of Conjunto Folklorico Universitario. Ariel specialises in Afro Cuban, Rumba, Son, Cha Cha Cha, Danzon and Mambo Cubano.

Afro-Cuban Dance
This dance represents the different god’s of the “Panteon Yoruba “. These Dances involve many pelvic and torso movements.
Most of the dances are from the Afro-Cuban religion called Santeria. These dances are originated from Yoruba traditions imported by enslaved Africans into Cuba .Over the course of the workshops Ariel will focus on Shango, Yemaya, Rumba, Son and a fusion of Afro Cuban dances.

Shango::
Owns thunder, lightning and is the owner of the sacred Aña (Drums). These drums, with their driving rhythms, exemplify Shango’s power, virility and warlike character. His colour is red.

Yemaya::
She is the Mother of the Seven Seas, the Santeria Orisha of fertility and motherhood. She offers protection to women. She is likened to the patron saints Lady of Regla, and Mary, Star of the Sea. Her colour is blue.

Rumba and Son:
A Spanish work which Cuban ancestors choose to name to their interpretations though rudimentary instruments and songs. This type of dance has three forms, “Yambu”, “Guaguanco” and “Colombian”. A pair dance were the woman and man represent theatrically different occurrences from their everyday lives.
With “Yambu” and “Guaguanco” the rhythm is slightly faster as are the movements. It is characterised by the actions the man carries out towards the woman, known as “Vacunao”, a movement the man carries out towards the pelvis of the woman. “Columbia” which is only danced by men, demonstrates all the virtues of the dancers: agility, capability and skill in carrying out all movements.

Son::
Son, the dance, starts with the formal, closed embrace of the man and woman. The couple maintains a very upright frame, with quick flirtatious and sensual side-to-side movements of the shoulders, torso and hips accenting the underlying six count rhythm of the feet. Son is danced off the beat, so the couple moves on the half beat before one.

Costs
£25 per workshop (£30 on the day)
Places are limited so advanced booking recommended
Book online – www.dance2salsa.co.uk/arielworkshop2022